Should My acts remain hidden? No! For thus says the Lord: I am a light, and that which comes from Me is light, and must be brought to light. Therefore it is My will, that My presented testimonies shall not remain hidden.
Johann Friedrich Rock, 29 March 1717, Birstein

A Zeugnis (Inspired Testimony) is a direct communication from the Holy Spirit, delivered through a Werkzeug (Instrument). A Werkzeug is a person, in a state of inspiration, through whom the Holy Spirit sends its message to God’s people.

Zeugnisse usually are delivered orally (Aussprache) through a Werkzeug and recorded by a scribe. Occasionally a Werkzeug will deliver a Zeugnis in written form (Einsprache).

Depending on the circumstances, a Zeugnis consists of just a handful of pointed words, or, it can continue for many minutes and fill many manuscript pages. Some Werkzeuge used gestures and body language to further illustrate a message. And we are told that most Werkzeuge spoke slowly and rhythmically, enunciating each syllable of God’s Word.

A Zeugnis typically was delivered through one Werkzeug, but on rare occasions two, three, or even four Werkzeuge combined to deliver a single Zeugnis in a so-called Harmonischer Wort (Harmonized Word). For example, this manuscript excerpt from 28 June 1716 shows that J.C. Gleim, J.A. Gruber, Ursula Meyer, and J.F. Rock each contributed to this Zeugnis. (Underlining added.)

Zeugnisse (sometimes called Bezeugungen) are considered of equal spiritual authority to the Bible (but a Zeugnis does not supersede or contradict the Bible). Zeugnisse, along with the Bible, constitute the central source of knowledge that guides and directs Inspirationist belief, thought, and action.

Humans do not become Werkzeuge by their own volition. Rather, they are chosen by God. And once chosen, even the most reluctant Werkzeug cannot but fulfill his/her assigned role as a conduit for delivering the divine Word.

Werkzeuge serve the Gemeinde (Community) for varying lengths of time, from just a few days or months to many decades — all depending on God’s will.

Zeugnisse are often, but not always, preceded in a Werkzeug by involuntary internal and external agitations or stirrings, called Bewegungen. These Bewegungen rise out of a profound internal stillness, and can range from subtle feelings of warmth and intense spiritual joy all the way to vigorous physical agitations and ecstatic shouts. A Werkzeug experiencing Bewegungen is literally being moved by the Spirit.

Quick links to materials discussed below

Archive records show that nearly 4,000 Zeugnisse were delivered by Inspirationist Werkzeuge during the 35 years between 1714 (the founding of the Gemeinde der Wahren Inspiration) and 1749 (the death of Werkzeug Johann Friedrich Rock). 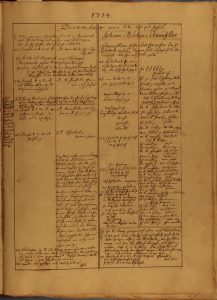 The first systematic attempt to catalog all existing Zeugnisse was carried out in the late 1750s in Germany, resulting in the remarkable Haupt=Register aller Bezeugungen des Geistes des HErrn vom September 1714 biss den 2nd Martii 1749 (Main Register of all Testimonies of the Spirit of the Lord from September 1714 until March 2, 1749). The Haupt=Register, a 367-page, bound manuscript, was the work of Paul Giesebert (P. G.) Nagel, an Inspirationist leader in Neuwied.

(For more about the Haupt=Register and Nagel, see further below.)

The Inspirationist Archives project would hardly have been imaginable without Nagel’s Haupt=Register.

The Neues Haupt-Register references the manuscript or printed text for each Zeugnis in the Archive, making it possible to quickly find a particular Zeugnis. It also indicates whether a Zeugnis has been transcribed into modern German and/or translated into English. Links to digital texts of the translations are provided.

The original Haupt=Register lists nearly 4,000 testimonies chronologically, providing date, location, Werkzeug, first and last words of the pronouncement, and references to where it can be found, both 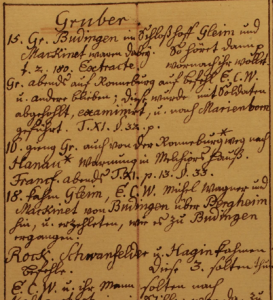 in manuscripts and in printed works. A note on the circumstances of the testimony and whether it was directed toward a particular individual or group is often added to the entry.

Not all testimonies that occurred in the 18th century are fully referenced in the Haupt=Register, and therefore not included in the Neues Haupt=Register.  We find numerous instances in the Haupt=Register where Nagel refers to a testimony, sometimes noting its content, but supplies no first and last words. This suggests that Nagel did not have access to the particular testimony; perhaps it was not recorded or had been lost by the time Nagel set to work. An example of this is the entry for J. F. Rock on 24 May 1716. Here Nagel notes four testimonies through Rock and to whom they were directed. However he provided no first and last words and his manuscript references give only a narrative of the events, without the text of the testimonies. We know of cases where a scribe was unable to record a testimony because the Werkzeug spoke too fast, he was unable to write due to the crowd in the street, and he was unable to write because of extreme cold. A scribe’s notebook was once stolen, and in another instance confiscated by the authorities. When unrecorded and lost testimonies are taken into account, the total number of testimonies delivered in the 18th century easily surpasses 4,000.

↓ Download the Haupt=Register. [Note that this is a large digital file that you must download to your computer before you can open it.]

As a detailed record of the travels, worship services, and both internal and external conflicts of the community, the Haupt=Register provides an invaluable chronology and context to the 18th century origin and evolution of the Community of True Inspiration in its first 35 years. Furthermore, it provides a framework for understanding all other documents, letters, narrative accounts, and polemical works produced by members of the community at that time. Given the scope and significance of the Haupt=Register, it is curious that we have found no reference to it in any contemporary documents or later historical accounts. Even Gottlieb Scheuner, 19th century historian of the community who had access to many original sources, makes no mention of it.

The Haupt=Register—like so many other Inspirationist works—has an anonymous compiler. Nevertheless we can fairly confidently state that it was compiled by P.G. Nagel in the late 1750s and completed in 1762.

Paul Giesebert Nagel was born in Esslingen in 1716. His father was a lawyer and he also studied law. However, Nagel chose not to practice the profession and instead withdrew from worldly matters to lead a quiet and pious life. He became acquainted with the Community of True Inspiration and joined the community in Neuwied in 1740. After J.F. Rock’s death in 1749, Nagel, along with Jonas Wickmark in Lieblos, assumed leadership roles in the community. He, Wickmark, and others continued the visitational travels from congregation to congregation, helping to unite the disparate Versammlungen into one community.

Nagel and Wickmark were also instrumental in collecting and publishing the testimonies of Rock, Gruber, Gleim and Meyer, as well as various accounts of the lives and deaths of community members. It is fair to say that without the extensive travels and publication efforts of Nagel and Wickmark, the Community of True Inspiration would not have survived for long after Rock’s death. Nagel died in 1779, and Wickmark seven years later.

Several letters dated from 1758 to 1761 to and from Nagel provide evidence that he was working on a major project at that time to identify all testimonies from 1714-1749. more...

For example, this fragment of a letter from P.G. Nagel to Br. Hackenbrach, dated 23 August 1759, contains a list of Zeugnisse manuscripts that Nagel is requesting.  And we also learn that Wickmark was assisting Nagel in the project. 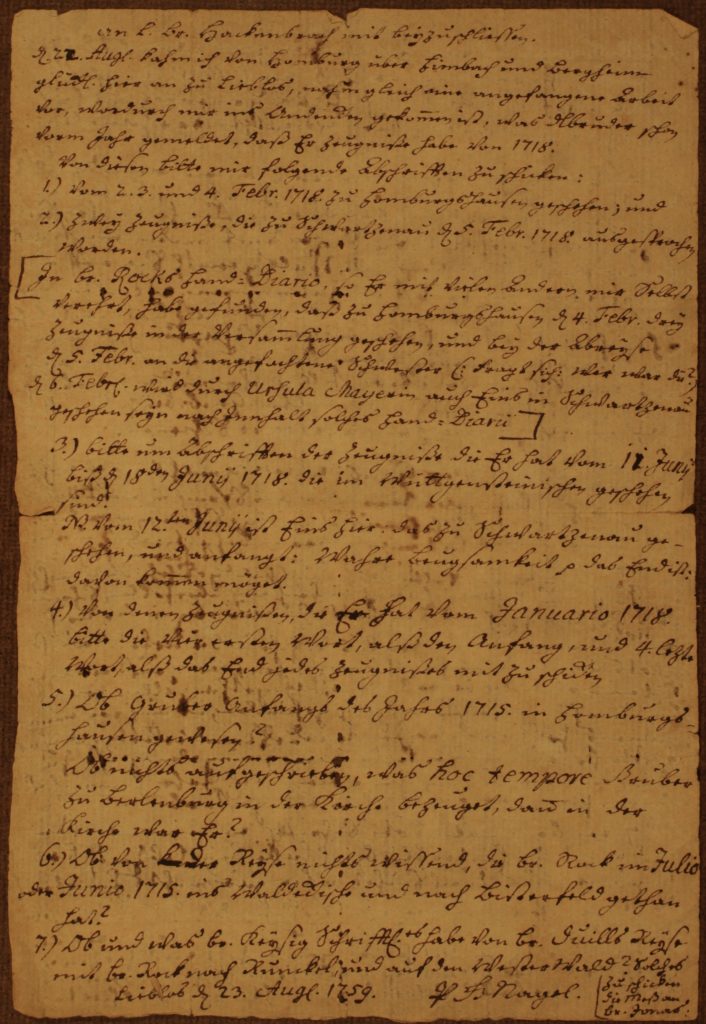 The Nagel correspondence, which includes requests for information on the early testimonies to J.A. Gruber in Pennsylvania, further shows that Nagel was very concerned that the corpus of divine testimonies might be lost and was therefore seeking information and sources to compile his register of all testimonies. We also find partial drafts of the register among his papers.

While the Haupt=Register is undated, internal clues corroborate the dates from the Nagel correspondence. We note that there are references to the second edition of Geschrei zur Mitternacht, a collection of J.C. Gleim testimonies, printed in 1758, but no reference to the collection of Ursula Meyer testimonies, Himmlischer Abendschein, published in 1781. A closer look at the Haupt=Register’s references to the Rock Sammlungen (yearbooks of J.F. Rock testimonies) narrows it further. We find references to printed volumes of the Rock Sammlungen up to number XIV (published in 1761) but none from XV (published in 1764) on. So we can safely assume a date of 1762 (or perhaps 1763).